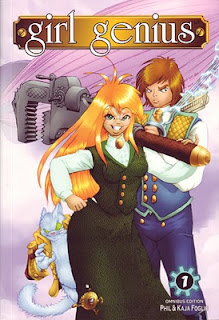 Fun bit of Final Fantasy-esque steampunk about Agatha Clay, who has been wearing a brooch that inhibited her natural spark - a kind of magic science-sense. When Moloch von Zinzer and his brother steal the brooch her powers begin to surface, at first by way of all-night engineering sessions in her long underwear, of which she wakes with no memory. After the robotic product of one such night causes havoc searching the town for her parents she attracts the attention of Baron Wulfenbach, autocratic ruler of the land, who whisks her off to his flying airship fortress. There she becomes assistant to the Baron's son Gilgamesh - or is it vice versa? - and meets other people with powers like hers, collected from all over the world to keep their families in check.

For a three-time Hugo-winner (albeit for later volumes), Girl Genius is a bit fluffy and derivative, but it’s carefully planned, well-paced and charming: I read it in a single day. There are many hints about the past, a steady drip-feed of revelations, and a promise of lots more to come. The Baron in particular proves to be a character with a fascinating history, a man both better and worse than expected, and I became quite fond of murderous pirate queen Bangladesh Dupree. The art is unusual but expressive - the female characters have gigantic thighs and tiny heads! - and the steam-driven machinery is detailed and nicely designed. Presenting the colour pages in murky greyscale means it's a book best read in a well-lit room, and I’d be inclined to get future volumes in colour. Not Hugo-worthy, perhaps, but rewarding nevertheless.