And they were all wearing eyepatches! 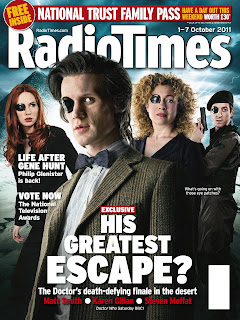 What a fantastic episode of Doctor Who that was last night! And the question that mustn't be answered? Quite proud of myself for guessing it right ages ago (the evidence is on a Facebook comment thread somewhere!). My guesses are usually way off.

It's taken a little while for it to sink in that we saw the Doctor get m*****d! Imagine if that had happened in the TV movie on Fox! The writers have inched us into a place where it was what we expected, and now there it is. It happened, and we didn't flinch. Wow.

And my four-year-old daughter pointed out this morning that a certain young lady now has a stepmum.

One of the many things that knocked me out about this brilliant episode was that it can be seen as the ultimate in-joke, a tribute to the Brigadier, whose quiet death we learned about through a phone call to a nursing home, just as the Doctor wanted him to saddle up for another adventure.

Because in this episode, as in Nicholas Courtney's famous anecdote about Inferno, they were all wearing eyepatches.

I hope that by the end of the day Steven Moffat has won a British Fantasy Award. It would be well deserved.
Posted by Stephen Theaker

Email ThisBlogThis!Share to TwitterShare to FacebookShare to Pinterest
Labels: Doctor Who