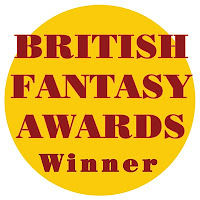 The winners of the British Fantasy Awards 2011 have just been announced. (Thanks to Maura McHugh for live tweeting them.)

BEST ANTHOLOGY: Back from the Dead: The Legacy of the Pan Book of Horror Stories, Johnny Mains (ed.) (Noose & Gibbet)

Wowser. Five awards for stuff published by the BFS chair and his partner… You can read the very best fantasy short story of 2010 here. And which dummies voted for Sherlock..?

Can't help thinking this may lead to renewed calls for the awards system to be revamped, although I don't know what system would be better. Perhaps a panel to read the shortlisted works?

Glad to see Black Static winning. Well deserved! But bear in mind that TQF is eligible again for 2012, so its reign may be short-lived!

Videos of the awards are now available on YouTube. Thanks to Vincent Holland-Keen for letting those of us who didn't make it to the event share the embarrassment…
Posted by Stephen Theaker