Murky Depths sinks beneath the waves… 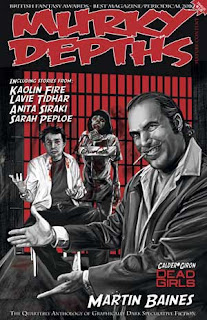 Sad to read that the last issue of Murky Depths has been published, as announced here by the editor, Terry Martin. Previous entries on the blog had tended to paint a pretty bleak and sometimes angry picture, so it doesn’t come as much of a shock, but it’s still a shame.

It was an interesting attempt to merge comics and fiction, one of its most attractive features being double page art spreads to introduce stories. We had quite a few contributors in common with them, including David Tallerman, Alison Littlewood, Zachary Jernigan and Jeff Crook.

I get asked sometimes whether we might try to turn TQF into a semi-pro market at some point, but the reason we probably won't is fairly well summed up by Terry Martin's reason for closing down:

"Optimism has, eventually, to be checked by common sense and a business model that, at the very least, gives a return that covers the full costs of production and distribution."

That's the tricky bit – the more you spend, the bigger the hill you have to climb to get it back. We use POD for our print issues, which keeps our costs very low, but limits our sales. A middle ground is hard to find. I think the route to growth for us is likely to be in our line of ebooks rather than the magazine.

The final issue of Murky Depths is on sale here, and back issues are still available.
Posted by Stephen Theaker