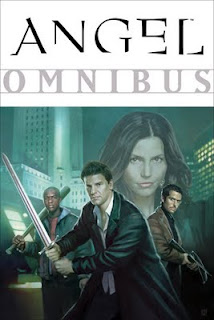 Having recently left Buffy, Sunnydale and the Hellmouth to star in his own TV series – and comic, of which all but two issues are here collected – Angel now lives in Los Angeles. Interesting characters like (dark) Wesley, Fred and the Host are far off in his future; most of these stories are set in the period before they showed up. Cordelia was working at Angel Investigations from the beginning, but Irish half-demon Doyle is the one with the visions – for a while, at least – and hard-knock detective Kate Lockley turns up more often than anyone would have hoped.

There's a certain pleasure to be had from revisiting a brief period of a favourite programme, and for comics based on a show that had still to find its feet, these are okay: pedestrian, but readable. The Christian Zanier art featured in most issues was not really to my taste, but didn't get in the way of telling the story. The stories – mostly by or co-written by Christopher Golden – feature the usual round of demons and monsters, and don't add up to much, but I was more than happy to spend a few nights reading them. Not classic comics, nor classic Angel, but not too bad.