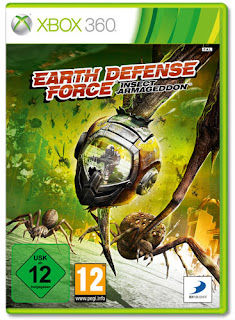 The long awaited sequel to one of my favourite games, Earth Defence Force 2017. Once again aliens are attacking Earth with augmented insects and giant robots. Graphics are slightly improved, and there isn't quite as much slowdown, perhaps because the number of attacking insects has been reduced. A wide selection of novel weapons is once again available, while four character types allow for slightly more variety in play. Jet armour can scoot up and around the play area, while tactical armour has a handy turret; previously turrets took up one of your two weapon slots. Voice work and dialogue is again very funny: an intelligence officer asked for help on dealing with a new type of cybernetic ant suggests you shoot them with your guns, while avoiding their attacks - good advice! It's a little easier than the previous game in that allies are able to revive you; only when all three of you are dead is it game over. One gameplay flaw is that the active reload, borrowed from Gears of War, is far too finicky; too much early play is spent running in circles while botched reloads complete.

As a full-price, big-budget game you'd be disappointed with the limited gameplay, but for a budget title it’s fun. There’s one big problem: this game is ridiculously short in comparison to the previous one. Fifteen levels compared to fifty-three, and all the levels are in a single environment, the city, whereas the previous game took you to the beach, the countryside and even underground in the enemy hives. This game feels like little more than a shell for downloadable content, i.e. all the levels that presumably weren't finished in time for the game's release. That came as a huge disappointment to me, and it’s one deliberately engendered by the publishers, who have promoted it as having three campaigns. This isn't a game of three campaigns - it's a game of one short campaign divided into three chapters. When you finish the fifteenth level you are astonished to earn the achievement for beating the game, and, as if to rub your nose in how short the game has been, that achievement is called Lemon Squeezy!

It’s a good game to play online, one that’s easy to dip into, and in a game with so many weapons it’s interesting to see what combinations other players are using. But that can’t make up for the lack of a decent single player game. I played the previous game for months, this one for barely more than a week. Rent, don't buy, unless it’s going very, very cheap.