A few thoughts on BFS Journal #4 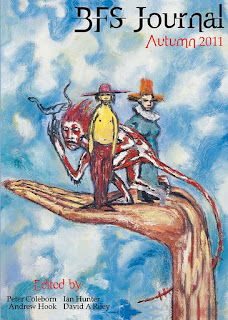 The new issue of the BFS Journal arrived in the post this week, looking very handsome in its Clive Barker cover art. I haven’t read any of the fiction yet (it generally takes me ages to get around to reading it all), so I won't review it properly, but here are my thoughts so far...

I’ve enjoyed David Riley’s seven Prisms (although I’m very pleased that his replacement will be Lou Morgan). For one thing, he’s published an awful lot of my writing! This issue’s Prism section, his last, has a solid seven pages by me (pages 57 to 63), all written at speed over a weekend thanks to a last minute deadline change.

As usual a handful of mistakes caught my eye in the Prism reviews - “lead” for “led”, “Tolkein”, stuff like that. One or two reviewers seem to be pulling their punches, and some reviews spend a bit too long summarising the plot, but I enjoyed reading them all.

The highlight of Prism for me was Mark Morris’s account of writing a professional novel NaNoWriMo-style - I'd love to see more of this kind of thing in Prism. The ironic thing about the article is that Mark's adaptation of the game Dead Island, though written in a month, is likely to be better than the game, which took six years or so. (From the 3/10 review in Edge it sounds like a complete duffer.) John Probert’s column on retitling of movies is also an interesting one.

There are quite a lot of reprints in the Dark Horizons section (34 pages out of 60, I think), but it’s all new to me. I enjoyed the comic by Jay Eales and mpMANN (originally from The Girly Comic), but haven’t read the rest yet. Peter Coleborn, editor of the Dark Horizons section, has also stepped down - the Christmas issue of the Journal will be his last.

New Horizons editor Andrew Hook is also leaving, and the section is being allowed to fade into history. The material spread across the four issues of the BFS Journal so far would have been #6 and #7 of the standalone magazine, I think, which Andrew had been planning as his last for some time. I’ll miss his work with the BFS; I liked the fiction he published; but I understand why he’d want to spend more time on his own writing.

It’s not hard to see why New Horizons has been discontinued in the context of the journal - it made little sense having two separate fiction sections in the same magazine. On the other hand, New Horizons was originally introduced to spread the workload, so that each journal editor had six months between issues. I suspect the BFS might find it difficult to find a reliable editor to produce a decent-sized journal every three months.

I couldn’t have done it, not without putting TQF on hold. Although I produce TQF every three months, that’s my main hobby. The thing with the BFS is that almost everyone who volunteers is already doing something creative with their hobby time (writing, a zine, a small press, a blog, making films, etc), and then they have to find time for their BFS duties on top of that.

The BFS has also sent out this week Full Fathom Forty, a 500pp collection of fiction from BFS members and friends. Like Dark Horizons, it’s mostly reprint (27 or so out of 40 stories) but all are new to me. There are some very good contributors - e.g. Conrad Williams, Nina Allan, Robert Shearman, Cate Gardner, Christopher Fowler and Alison Littlewood - so I bet the anthology as a whole will be excellent.
Posted by Stephen Theaker