Memories of the Future, Vol. 1, by Wil Wheaton - reviewed by Stephen Theaker 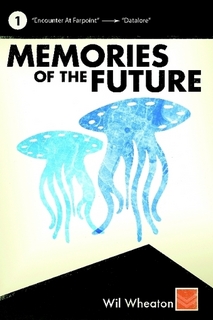 When Star Trek: the Next Generation began, I was a schoolboy watching it at home; by the time it finished (on UK television, at least) I had been to university, met my future wife and spent a year living in France. And yet that was nothing compared to the changes in Wil Wheaton's life during that period. In this book he discusses the first half of the first season of TNG, both as a viewer, watching the episodes for the first time in a decade, and as a cast member, revealing the behind-the-scenes difficulties of the production as a whole and of him in particular.

Wil's character Wesley Crusher was notoriously unpopular - a teenager with a snotty attitude and a penchant for showing up the rest of the crew - and here we see the actor putting a bit of clear blue space between himself and the American Adric. But he's not as if he's siding with the bullies against Wesley and his younger self; he's just really disappointed that Wesley was handled so badly in the early episodes.

The irony, of course, is that Wil Wheaton is now firmly established as a geek god, thanks to his blog and appearances in The Big Bang Theory, The Guild and Eureka; his brief appearance in Star Trek: Nemesis was pretty much the only thing anyone liked about that film. An announcement that Captain Wesley Crusher was about to star in Star Trek: the Third Generation would be immensely popular, something that would have been utterly unthinkable at the time these episodes were broadcast.

The book is always enjoyable, and often very funny, even if it sometimes feels like Wheaton is trying to cram in as many references to other people's jokes as he can. If Mike Nelson's Movie Megacheese is the Enterprise, this is the shuttlecraft. But I read it all within a day or two of buying it, and I was disappointed the book ended on "Datalore" with so much of the first season still to go; if volume 2 had been available on Kindle when I finished this one I'd have bought it right away.