Doctor Who: The Guardian of the Solar System, by Simon Guerrier (Big Finish) | review 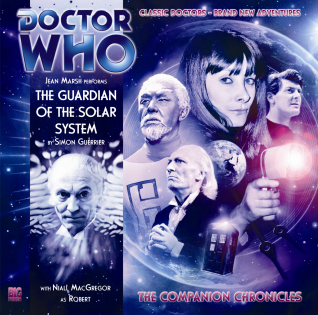 The first story in the fifth series of the Companion Chronicles sees the return for seventy-one minutes of Sara Kingdom (Jean Marsh). Well, sort of. On television she helped the first Doctor defeat the Daleks’ master-plan, and paid the ultimate price. Here, what appears to be a digital copy of her mind has lived on for a thousand years as the host of a guest house with remarkable properties. As the house Sara healed the sick daughter of a man named Robert (Niall MacGregor), and in return he promised to stay there forever, not realising perhaps that forever in that house would be a long time indeed. He has one last thing to ask of her, but before she will hear his request she wants to tell him one last story, a side-quest during her time with the Doctor and space pilot Steven Tyler, when they travelled back in time to discover the dark secret at the heart of the human empire, what powers their flight to the stars. Along the way, she got the chance to meet Bret Vyon, the brother she would betray, when he was still alive. It’s a good story with tender, emotional performances, and a melancholy, downbeat feel, about people caught in the wheels of time, trying to escape the inevitable, trying to escape the past. Stephen Theaker ***
Posted by Stephen Theaker