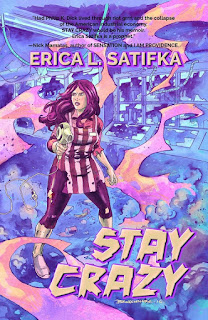 Emmeline Kalberg, Em for short, is a nineteen-year-old young woman with mental health issues that landed her in a psychiatric hospital a while back. She doesn’t remember quite what happened, but she’s out and living with her mum and younger sister, and hoping to return to college when she’s well enough. For now, though, her mum has set her up with a job at a big chain supermarket, Savertown USA, so that she doesn’t spend too much time cooped up at home. The problem is, once she starts working there, she starts hearing voices. She’s used to that, given that “even alone in her room, drifting off to sleep, Em always kept her music on low, a ward to keep the voices at bay”, but the voice in the supermarket is more persistent than usual, talks to her through the ID chips in the products, and doesn’t follow her home. It warns about bad stuff happening, and as supermarket colleagues begin to meet bad ends she starts to take it seriously. As the situation worsens, the reader can’t be sure what’s really going on, but we do know that Em is experiencing something, and we’re stuck on the sidelines hoping that one way or another she makes it through. It’s a short, direct novel, and one described by some readers as comedic, although for me its portrayal of mental illness seemed too tragically realistic to be all that funny. Its depiction of life working in a supermarket is also spot on, showing very accurately the justifiable pride people take in their hard work, the rivalries between departments, and the expectation that employees will be excited about visits from upper management. As someone who only rarely made it to the dizzy heights of shelf-stacker in my brief supermarket career, I was impressed and convinced by how quickly Em took to it. Comparisons have been made to Philip K. Dick, and there are definite similarities with books like Valis and Radio Free Albemuth, one difference being that Dick’s books uncovered what was really happening, while Stay Crazy leaves everything open to doubt. I was reminded too of Maria Bamford’s Netflix show Lady Dynamite, which also shows a woman leaving a psychiatric hospital and returning to a world that seems as crazy as she ever was. People who like one may well enjoy the other. ***
Posted by Stephen Theaker