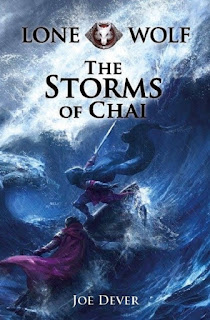 In my review of Lone Wolf 22: The Buccaneers of Shadaki above I mentioned that Joe Dever is now self-publishing the Lone Wolf series of gamebooks, after close on twenty years of problems with first Red Fox, then Mongoose Publishing, and most recently German publisher Mantikore Verlag. One would have hoped that after all the trials and tribulations suffered by both Dever and his fans at the non-profit Project Aon (www.projectaon.org), his decision to take charge of the process himself would have run smoothly, but alas this was not the case. The Storms of Chai is book 29 in the Lone Wolf series as a whole and the ninth adventure in the New Order series, which rebooted with a new player persona in Lone Wolf 21: Voyage of the Moonstone (reviewed in #55). The New Order series was published at the rate of two books a year from 1994 to 1998, by which reckoning The Storms of Chai would have been published in 1999. With Dever at the helm after seventeen years, the long-awaited adventure – which had been sold out on pre-orders – was due for release in April 2016. There was a delay with the printers and it seemed as if the Lone Wolf project had stalled yet again. The book was finally released in mid-May and with a stack of further pre-orders to meet, Dever ordered a second edition printed. In yet another improbable twist in the Lone Wolf story, a second first edition was printed and although the books are exactly the same, the difference in paper used by the Turkish (fat) and Lithuanian (thin) printers has resulted in the former being substantially thicker and heavier than the latter (Dever explains the full story on the book order page: www.mapmagnamund.com/id72.html). There are no copies of the fat edition left and my copy (which is still available at the time of writing) is the later, thin one. As I mentioned in my review of The Buccaneers of Shadaki, I have suffered at the hands of small presses on several occasions, but I had no problems whatsoever with my order, the price (£19.99) includes postage and packaging in the UK, and all copies purchased from Holmgard Press arrive with Dever’s seal and signature.

The adventure begins in the early spring of MS 5102, seventeen years after the conclusion of Lone Wolf 28: The Hunger of Sejanoz (a conceit that neatly encapsulates the delay between planned and actual publication), which is not a problem for my Kai Grandmaster, True Friend, who only ages one year for every five (albeit at the cost of a silly name). The volume has a unique addition for a Lone Wolf collector’s edition, a “Timeline of notable events in Magnamund”, which covers the interim since True Friend put paid to the Autarch Sejanoz. In summary: various hordes of evil minions have been sallying forth from such fell places as the Doomlands of Naaros, Kraknalorg Chasm, and the Chasm of Gorgoron; the god Kai appeared before Lone Wolf to (somewhat belatedly in my opinion) warn him that Naar is up to his evil tricks again, following which – in MS 5101 – the Grand Brumalmarc of the Icelands and his ice demon allies attempted to invade the homeland of Sommerlund and seismic disturbances opened a gigantic chasm in the Darklands that extended the dreaded Maakengorge. Magnamund is, it seems, literally being rocked, and subterranean denizens that should never see the light of day are pouring onto its surface.


True Friend has spent most of the above years quietly, supervising the construction of the new Kai Monastery on the Isle of Lorn and taking command when Lone Wolf has been absent. The adventure begins with Lone Wolf returning to the monastery to hold a council, where he reveals that Magnamund is indeed under a coordinated attack by an unknown force. There are six armies attacking six different locations and the top six ranking Kai Grandmasters are despatched accordingly. Following True Friend’s slaying of Sejanoz, Chai rallied the New Kingdom armies to inflict a decisive defeat on Bhanar, but after more than a decade of peace, a Nadziranim sorcerer named Bakhasa (who has a nasty habit of raising the dead as unpleasant versions of their former cheery selves) has seized the remote Bhanarian city of Bakhasa. Zashnor is now in command of an Agarashi horde from the Doomlands and appears to have constructed a new Claw of Naar in an attempt to succeed where Sejanoz failed, in invading Chai. True Friend’s mission is to recover the Eye of Agarash from the new Khea-Khan before Zashnor can retrieve it and create a weapon of mass destruction by joining it with the replica Claw. The action begins with an airborne deployment to Chai and True Friend must race against the invading army to reach Pensei, the capital. The bulk of both the action and the story involve a prolonged but nonetheless exciting flight across Chai, from Pensei to Valus. The traditional combat finale of the first twenty-eight books has been replaced by a trio of final combats: first, Klüz, the Doomgah leader; then Xaol the Necromancer, raised from the dead since True Friend last killed him in Lone Wolf 25: Trail of the Wolf; and finally, Zashnor himself – along with his Zlanbeast. Each of these is a tough combat and there is little opportunity to rest between them, which brings me to my only criticism of a gamebook that otherwise meets all seventeen years’ worth of expectations.


This is a very hard game to play and the difficulty is purely attritional: first, Zashnor has amassed a formidable army that is already rampaging around Chai when True Friend arrives in-country; second, once True Friend has the Eye of Agarash it exerts a long-term draining effect that pops up when least expected; third, in my gameplay there was only one opportunity for all of True Friend’s endurance points to be restored and that relatively early on; finally, in my gameplay there were two occasions when two or more items of precious equipment were lost without the opportunity to recover or replace them. All of which to say that I think that The Storms of Chai would be nigh impossible to survive out of order – i.e., without True Friend having reached the rank of Sun Thane (level thirty-two out of a maximum of thirty-six) – and, for that matter, without the Grandmaster skills of both Deliverance and Weaponmastery. The volunteers at Project Aon have, amongst their many other services to Lone Wolf fans worldwide, helpfully provided a flow chart of each of the first twenty-eight books and although I suspect that the narrative of book 29 is no more linear than any of the others, the constant fighting against powerful enemies of all sorts makes it feel like what would be called a “hack and slash” dungeon crawl in Dungeons & Dragons. Certainly, this is one of the gamebooks where brawn (and luck) counts more than brains, although it is an entirely gripping hack and slash. The story ends with two unanswered questions: first, how did Zashnor get hold of the real Claw of Naar, which was supposed to be safe in Dessi? Second, who or what is the power behind the new assault on Magnamund? The first is revealed in the bonus adventure; the second will, one hopes, be at least partially answered in Lone Wolf 30: Dead in the Deep. The bonus adventure is “The Tides of Gorgoron” (written by Dever and Vincent Lazarri), where the reader adopts the persona of Lord Elkamo Doko, a Vakeros warrior-mage, a group of warriors who have been taught some of the skills of magic by the Elder Magi of Dessi. Lord Doko begins as second-in-command of a force sent to defend the Colo Bridge from the advancing Agarashi. The adventure is very entertaining, has a direct link to the narrative of The Storms of Chai, and the warrior-mage player character is perfectly-pitched – neither too similar nor too dissimilar to a Kai Grandmaster, thus making a perfect complement. Rafe McGregor