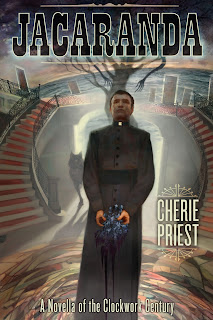 Juan Rios is a nineteenth-century padre with a past painted in blood, some of it spilled righteously, most of it not. He has the power to Look and Listen, to see and hear more than others, and his involvement in many queer events, such as the incident at Rose Hill and the rancher at Four Chairs, has given him quite the reputation. That’s why Sister Eileen asks him to come to Galveston, Texas, to investigate the deaths at the Hotel Jacaranda, built against the pleas of the locals on the site of an ancient jacaranda tree. By the time he gets there, everyone else is leaving – there’s a massive storm on the way, one with a fair chance of flattening the hotel altogether. Almost everyone, anyway. There’s a bunch of people still at the hotel, visitors and staff, who couldn’t bring themselves to leave, and the hotel has been talking to some of them. It hasn’t been saying nice things. As the storm draws close and the bodies pile up the book traps the reader in the hotel too, listening to the tiles being ripped from the roof and the whispers from the spiral on the floor. This novella is part of the Clockwork Century series, like Clementine, reviewed here a few years ago, set in an alternative version of old America, but it’s very different. Where that was a rip-roaring tale of airships blasting each other out of the air, this is a tense story of people under siege, physically and psychically, under a roof that’s likely to fall down upon their heads, but it’s it’s just as good. Peculiar Sister Eileen and the padre make an interesting pair of protagonists. ***
Posted by Stephen Theaker