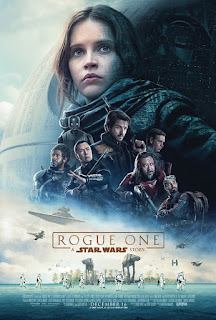 Some rooting, but more eye rolling… Rogue One mostly no fun.

Another group of sombre characters flying from planet to planet, another father-child relationship, another bad guy turned good, another sky swarming with spacecraft. Isn’t all this Star Wars stuff starting to get a little old? I did root for the protagonists in Rogue One, but I also rolled my eyes quite a bit.

But then there’s the guy at the theatre who told me he’s seen the film four times. And what about all the critics and laymen who gave it glowing reviews? How can they look past the sappiness, the expository dialogue, the lukewarm characters? Could it be that they’re all still under the spell of the first three films (Episodes IV–VI)?

Rogue One bridges Episodes III and IV. Like Episode VII: The Force Awakens, Rogue One features a female protagonist. This time it’s Jyn Erso (Felicity Jones). Accompanied by Alliance Captain Cassian Andor (Diego Luna) and reprogrammed Imperial droid K-2SO, Jyn undertakes a journey to find her father Galen (Mads Mikkelsen), a scientist forced by the Imperial Army to design a weapon of mass destruction. Then the heroes and their growing crew set out to get the digital plans for a flaw that Galen programmed into said weapon.

Rogue One isn’t without strengths. A tense opening scene, for instance, shows a young Jyn escaping after chief antagonist Director Krennic (Ben Mendolsohn) and his Imperial henchmen capture her father. Krennic’s spotless white uniform – it sets him apart throughout the film – flapping in the wind and his cocksure attitude propel the scene.

Moreover, a strong narrative arc follows all the conventions of a good story. Characters have clear-cut goals and rising obstacles impede their efforts. Still, an overly clinical approach to storytelling may have weakened the magic.

A couple of characters make a somewhat memorable impression. The verbally unrestrained K-2SO makes some rather snide remarks that may induce a chuckle. To Jyn, he offers this gem: “I’ll be there for you,” then, after a pause, “The Captain said I had to.” And it’s a pleasure to watch Chirrut Îmwe, a monkish blind warrior with a near-religious devotion to the Force, use his staff to speedily dispatch the bad guys. In the film’s most emotionally stirring scene, Îmwe chants “The Force is with me and I am one with the Force” while walking through a battlefield. And it’s hard to not perk up every time Darth Vader gets mentioned or appears. Though Vader’s screen time is limited, he does regale the viewer with a demonstration of his fighting talents.

Still, the film offers no standout character, no Han Solo.

As usual, Forest Whitaker puts his all into his performance. Saw Gerrera is a mountain man type who saves and trains Jyn. However, his minimal screen time isn’t enough to create an emotional connection with the viewer; anything that happens to him feels anticlimactic. It’s like having a side dish from a five-star restaurant with a fast food meal: it just doesn’t fit.

Another shortcoming of Rogue One: the opposition never dominates, so protagonists are never truly against the ropes. It all seems so easy.

The film builds to a major battle between the Rebel Alliance and Imperial Army. Yes, it’s cool to see the Imperial Army’s imposing structures amid sunny beaches and palm trees on the tropical planet of Scarif, but the chaos of the battle and the heavy reliance on special effects leaves the viewer feeling a bit uninvested in what unfolds. Today’s adolescent would surely scoff at the special effects of Episodes IV–VI, but didn’t the lack of technology in the ’70s and ’80s propel George Lucas and company to create solutions that led to the timelessness of those characters and stories?

Though I’m far from a Star Wars fanatic, I (like just about everyone) think episodes IV through VI are brilliant and that Episode VII: The Force Awakens captures the magic. Also, that quiet Darth Maul (Episode I) is a blast to watch. It is hard to believe that, without the strength of its predecessors, Rogue One: A Star Wars Story would have received the same critical acclaim.

Remember what the 40-year-old Peyton Manning did after he led the underdog Denver Broncos to victory in Super Bowl 50 last year? He retired. Perhaps Star Wars should have followed his example. – Douglas J. Ogurek **