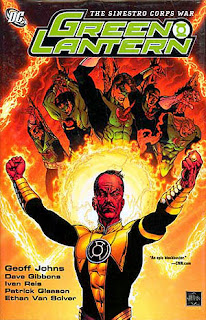 This is a story from what I think of as the “real” DC universe, the time between Crisis on Infinite Earths, to which this book is in many ways a sequel, and Flashpoint, which reset everything for the New 52 universe. For a long time before the crisis the DC heroes lived, like Archie or the Bash Street Kids, in an eternal golden present, but a Teen Titan called Robin wanted to grow up, and he couldn’t do that unless other people got older, and so time began to flow. The hair of Green Lantern Hal Jordan went grey at the temples, and during The Return of Superman he lost his mind, after Mongol and the cyborg Superman destroyed his home Coast City while building a base. He betrayed the Green Lantern Corps, became the villain Parallax, and gave his life to save the world from the Final Night, the attack of a sun-eater. What a life! But it wasn’t over! He then became the new Spectre (god’s spirit of vengeance) but it didn’t stick, and eventually, like so many Silver Age heroes, he too returned from the grave, to lead the Green Lantern Corps once again, his misdeeds as Parallax retconned as a kind of possession by a fear monster by that name.

The problem with Hal is that for all the affection in which he’s held and the tumultuous events of his life, he tends to be quite a dull, flavourless character – presumably the reason they replaced him in the first place. This book surrounds him with other Green Lanterns to prevent that being a problem. Long-time GLs John Stewart, Guy Gardner and Kyle Rayner all play prominent roles, but this is about the Green Lantern Corps as a whole, fighting a huge war against its most terrible threat. Sinestro, once the greatest Green Lantern of them all, has been recruiting his own yellow corps, of villains who have the power to inspire fear. At his side are the cyborg Superman Hank Henshaw, deranged survivor of the Crisis Superboy-Prime, and the Anti-Monitor himself, plus thousands of other recruits.

Even Hal Jordan couldn’t make this book boring. It’s a true epic in the style of the earlier books it draws on, the kind of thing that would usually be a company-wide crossover. There are a hundred things happening on every page, deaths by the dozen, the story taking place in amongst a blizzard of green and yellow rings searching for worthy new owners. The issues collected here are from two titles, Green Lantern and Green Lantern Corps, not that you could tell, the story holding together so well. The collection does something that is much too rare in DC’s books – each chapter identifies the original issue it came from, and provides the individual writers and artists and the original title of that story, so you know exactly what you’re reading. The artwork throughout is very good, the amount of work that must have gone into each panel quite staggering. Almost any page of it would make an epic poster. I can’t think of a Green Lantern story I liked more. The battle between the vicious Superman-Prime (as he’s now called) and a Daxamite Green Lantern who can almost match him in strength is brilliantly brutal. I also liked the way that the real Superman shows up in the big battles at the end but doesn’t get to speak, because it isn’t his comic. And yet my very favourite bit, in this interplanetary, intergalactic, interuniversal war, was the littlest: Green Lantern Leezle Pon, a superintelligent smallpox virus. Stephen Theaker ****
Posted by Stephen Theaker