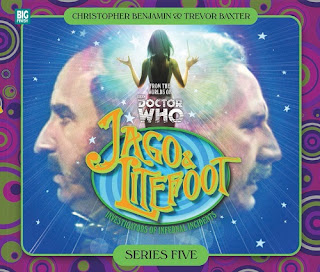 Professor Litefoot (played by Trevor Baxter) and theatre impressario Henry Gordon Jago (Christopher Benjamin) first appeared in “The Talons of Weng-Chiang”, a popular Doctor Who story starring Tom Baker as the fourth Doctor, and made such an impression that a spin-off was reportedly considered. Good ideas never die, they just wait for their moment, and eventually Big Finish began this series of audio stories for these Victorian “investigators of infernal incidents”. Best of all, their stories are now available on Audible, along with many other Big Finish titles. (This one was supplied for review, but I had already spent my monthly tokens on UNIT: Dominion and the fourth Doctor Lost Stories box set.) Season five puts a new spin on the format, thanks to the Doctor’s useless navigational skills. After taking the pair from 1893 to the New World and to Venus in a pair of very entertaining specials, the sixth Doctor dropped them off at home, but in the wrong century: they are now in 1968. These stories deliberately (as the special features explain) skip over their initial acclimatisation to the swinging sixties, to show them settled in their new lives, and ready for new adventures. Litefoot is working in an antiquarian bookshop, bought for him by Ellie Higson (Lisa Bowerman), a friend from the old days who has made the most of her vampiric longevity. Jago is on the verge of becoming a television personality, presenting an old-time talent show. Each of the four episodes lasts about an hour. All are by male writers, but Lisa Bowerman directs. Jonathan Morris writes “The Age of Revolution”, about a TV star, “Timothy Vee off the TV!”, and his peculiarly hypnotic statue. “The Case of the Gluttonous Guru” by Marc Platt is about the swami Sanjaya Starr, leader of the temple of Transcendental Meditation, who is looking for a host for Mama, the Great Birth Mother… “The Bloodchild Codex” by Colin Brake sees Ellie get skittish as another vampire shows up on the scene, looking for a book in Litefoot’s collection. “The Final Act” by Justin Richards confronts the pair with old enemies. Connections to the past are present throughout the stories thanks to the grand-daughter of the Great Godiva, Guinevere Godiva, who takes an uncommon interest in the crystal they brought back from Venus, and Detective Sergeant Dave Sacker, dogged descendant of another old friend. The four stories are all equally enjoyable, providing terrific dialogue for the two leads to wrap their wonderful voices around, with a sound mix that works just as well whether one is listening on earphones, a pillow speaker or a surround sound system – though obviously the latter was best. The audiobook also includes seventy minutes of special features. Stephen Theaker ****
Posted by Stephen Theaker