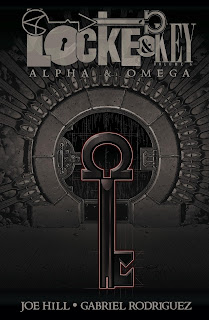 Since the Locke family moved to the town of Lovecraft, Massachusetts, and began to live in the big old Keyhouse, things have been weird, dangerous and magical. By the time this final collection begins the children have almost got to the point where they can cope with their losses and new responsiblities, but the demon that possessed Luke Caravaggio is hiding among them, gathering keys of power and waiting for the most devastating time to strike: prom night, when the kids are planning to have an afterparty in the cave down by the ocean. Just where he wants them. Luckily Tyler, Kinsey and Bode have found friends and allies since they came to town, so they won’t have to face this fight alone. Writer Joe Hill and artist Gabriel Rodriguez bring their story to a satisfying conclusion. The stakes are high, the heroes are brave, the villain is vile, and thematically it all ties up with where it began, Tyler telling the bad guy, “I wouldn’t underrate the power of regret. It doesn’t feel good… but it’s hard to learn anything important without it.” That’s “Omega”, and in the epilogue, “Alpha”, Tyler makes some kind of peace with his own great regret. It’s a good place for the story to end, though you feel there’s still a lot of space in this world for new stories to be told. ****
Posted by Stephen Theaker