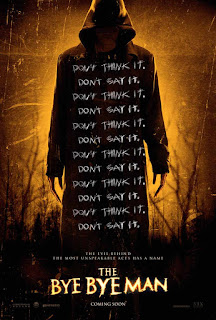 When I go to a horror film, I want to feel something. I want the jolt of a good jump scare, or the lingering unease caused by an unidentified malicious presence. I want to get grossed out, to be appalled by violence, or even to laugh with a good horror comedy. With The Bye Bye Man, a horror film whose primary intent seems to be to scare the viewer, I felt disappointed. Oh, it does occasionally incite laughter, but that’s based on the bad acting and illogic.

The film warns that saying or even thinking “the Bye Bye Man” will unleash the monster that bears that name. He is a hooded figure with a penchant for using his E.T.-like fingers to scratch walls for no apparent reason.

Elliot, girlfriend Sasha, and friend John move into an old house off their college campus. After some dull introductions to Elliot’s brother and his family, a dull housewarming party, and a dull séance—are you seeing a trend here?—Elliot stumbles upon the dreaded name and unwittingly resurfaces the figure after a near fifty-year hiatus. For the rest of the film, the Bye Bye Man infects the trio, casting them into a world of hallucinations, jealousy, and mistrust. Elliot’s attempts to mentally expunge the name by chanting “Don’t think it, don’t say it, don’t think it, don’t say it” grow tedious and annoying. And isn’t it true the more you try to fight certain thoughts, the more you have them?

Even the tensest scenes seem silly upon further reflection. For instance, one feels anxiety when Elliot and Sasha look at the black cowl hanging on their bedroom wall. But then, why is there a black cowl hanging on their wall? And why don’t they just take it down? It’s never explained. In another scene, Elliot heads down to the basement to investigate a scratching noise that could be the Bye Bye Man. If it is indeed the hooded fiend, why is he scratching? Again, never explained. Then there are the coins dropping and the sound of trains to signal the Bye Bye Man is coming. But why?

Occasionally, the film flashes back to 1969, when journalist Larry Redmon, the last poor guy who tried to exorcise the name from the minds and lips of humanity, goes on a neighbourhood shooting spree. Not a bad way to start the film. But when a shotgun blows away someone at point-blank range and it just leaves a small smudge on the wall and no blood pool (presumably to meet PG-13 parameters), it seems inauthentic.

Once the Bye Bye Man is revealed in the (mangled) flesh, he loses a lot of his potency. As many of the scariest horror films in recent history have proven, the threat is most frightening when it hasn’t manifested itself, when it’s lurking and just as mysterious to the viewer as it is to the main characters.

If you can think of a horror movie cliché, it’s probably in The Bye Bye Man. Sloppy sketches of frightening creatures, internet research, séances, creepy girl with eye shadow, character with eyes missing, and writing on walls. It’s all in there. And how do the filmmakers substantiate the gravity of the research scene? They have Elliot wear glasses, of course! Additionally, when he searches “The Bye Bye Man”, he gets zero results. That’s surprising, since I just typed in some nonsense (i.e. “lke naea ene eare”) and got 810,000 results. What search engine is he using?!

It says something when the film’s most interesting character is the main villain’s sidekick, a gigantic skulking hellhound with a huge head and skin that looks like toxic sludge.