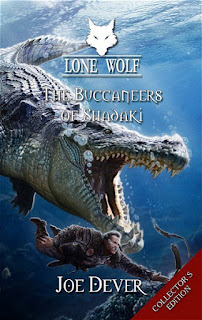 In #55, I reviewed the collector’s edition of Lone Wolf 21: Voyage of the Moonstone, published in English by Mantikore Verlag in 2015. The review was more of a reflection on the whole series, summarising the thirty years between my first reading of Lone Wolf 1: Flight From the Dark to the point where, after numerous improbable narrative twists, there once again seemed to be a delay in publishing. The short version: Lone Wolf was originally conceived as a series of thirty-two gamebooks, the first of which was published in 1984, stalled – apparently forever – in 1998 at Lone Wolf 28: The Hunger of Sejanoz, and has been the subject of many and varied attempts to both finish the series and return all its instalments to print. I concluded by noting that although Mantikore Verlag’s taking over of the series from Mongoose Publishing in 2013 was an initial success, it seemed to have run into trouble in the second year. On 1 April 2016, shortly after I submitted the review, Joe Dever announced that he was self-publishing the rest of the collector’s edition series, including the previously unpublished four books. I must admit I was disappointed by the news, after the heroic efforts the fans at Project Aon (www.projectaon.org), a non-profit organisation, had made on Dever’s behalf, but I’m pleased to report that Holmgard Press (www.mapmagnamund.com) is flourishing. Lone Wolf 29: The Storms of Chai (also reviewed in this issue) was published in June and Dever is also selling the Mantikore Verlag volumes that are still in stock, books 18 and 22. Having suffered at the hands of small presses on several occasions myself, I’ll add that I had no problems whatsoever with my purchase of The Storms of Chai and that the price (£17.95) includes postage and packaging in the UK. In addition, all copies purchased from Holmgard Press arrive with Dever’s seal and signature (for those who set store by such things).

Returning to The Buccaneers of Shadaki, my Kai Grandmaster – True Friend – had put in the kind of performance his wimpy name would lead one to expect in his mission to return the Moonstone to the Isle of Lorn and found himself in the city of Elzian at the end of Voyage of the Moonstone. In my previous review I mentioned that the gamebooks have moved through distinct series as the overarching story progressed: a single campaign in the Kai and Magnakai series (books 1 through 12), followed by a series of standalone adventures in the Grand Master series (13 to 20) all with the same character, Lone Wolf. Voyage of the Moonstone marked the beginning of the fourth series, the New Order, in which the reader adopts the persona of one of Lone Wolf’s acolytes, and it was not clear whether the twelve books of the New Order would take the form of a single campaign or more standalone adventures. Dever seems to be employing a third, hybrid, option, with some New Order missions being standalone and others spanning more than one book (about which I shall have more to say below). The second half of the Moonstone quest takes True Friend “deep into the wild and lawless reaches of southern Magnamund”, which will only be familiar to those readers who played Ian Page’s regrettably short-lived spin-off series, The World of Lone Wolf (four gamebooks were published by Beaver Books from 1985 to 1986, beginning with Grey Star the Wizard).


This survey of the southern continent is the book’s greatest strength and the narrative is a sequence of fascinating explorations of and mini-adventures in the ports between Elzian and Lorn: from the emporium of Zharloum to the junkyard that is Dlash-da Ralzuha to a run-in with Sesketera, the despot of Ghol-Tabras; from the ruined splendour of Caeno, with its famous guanza derby, to the austerity of Nhang, with its eighty stone statues, and finally the Port of Suhn, ruled by the wizard Grey Star (hero of The World of Lone Wolf). The southern continent of Magnamund is every bit as interesting as its northern counterpart, where Lone Wolf cut his teeth, but The Buccaneers of Shadaki is more of a guidebook than a gamebook, even if it is a guidebook no one should be without. The combat finale is with a Zhürc, which might be a sea dragon and might not – one cannot be certain because there is no illustration – and provides an anti-climax either way. The creature on the eye-catching cover, drawn by Manuel Leza Moreno, is a scary sea crocodile called a Nigumu-sa that appears much earlier on, between Ghol-Tabras and Masama, but despite its presence the adventure as a game is altogether too easy.


One of the problems that has emerged in the New Order series was evident in some of the Grandmaster series: when one is playing a single character, who advances in prowess and power with each adventure but who is not involved in a campaign – working his way through increasingly difficult minions of an evil archenemy, for example – it becomes difficult for the author to maintain both the peril factor and a minimal degree of realism. True Friend is a Kai Grandmaster Senior at the beginning of Lone Wolf 21, which means that he is advanced to twenty-five out of a maximum of thirty-six levels of expertise and has several supernatural abilities. If Dever had opted to make The Buccaneers of Shadaki more challenging, he would have had to put some pretty tough opponents in relatively innocuous settings – but it would be stretching the imagination too far if street thugs and hungry animals were capable of taking on one of the most fearsome warriors on the continent. This is one of the reasons that I prefer a campaign to a series of standalone adventures. Speaking of which, like all the other Mantikore Verlag/Holmgard Press collector’s editions, this 574pp volume includes a bonus adventure, “A Wytch’s Nightmare” (written by Vincent Lazzari and Alexander Kühnert). The reader’s persona is the Wytch Yenna, her mission is to find the missing Grey Star, and the writers’ use of a female protagonist makes a very welcome change (true to its eighties origins, the various Lone Wolf protagonists have hitherto been exclusively male).


As my next review will be of Lone Wolf 29, I shall conclude this one with a brief summary of books 23 to 28. The Buccaneers of Shadaki ends with the promise of “a new and sinister threat to the fragile peace of Magnamund”. That threat is Baron Sadanzo and his robber-knights and Mydnight’s Hero (#23, first published in 1995) sees True Friend assisting the exiled Prince of Siyen to reclaim his father’s kingdom. Rune War (#24, 1995) returns the action to the Stornlands, a war-torn region in northern Magnamund where Lord Vandyan of Eldenora has used the Runes of Agarash to raise a reptilian breed of warrior. While Lone Wolf leads the crusade against Eldenora’s army, True Friend must break into the fortress of Skull-Tor to destroy the runes and his success sees him rise to become the second most powerful Kai Grandmaster. Shortly after the victory against Eldenora, Lone Wolf is abducted by a necromancer named Xaol and True Friend rescues him from Gazad Helkona in Trail of the Wolf (#25, 1997). (Unfortunately, the plot of rescuing friends or allies has been a little over-employed in the series, especially if one includes the standalone graphic novel spin-off, The Skull of Agarash, published in 1994, and “A Wytch’s Nightmare”.) Meanwhile, the greedy Dwarves of Bor have dug too deep in search of wealth, released an ancient horror called the Shom’zaa, and require True Friend’s assistance to defend their Throne Chamber in The Fall of Blood Mountain (#26, 1997). (As another aside, I should mention that this is currently the rarest of all the books; a second-hand copy was sold for just over £1000 on Amazon in August.) Vampirium (#27, 1998) takes a slight change of direction in that it initiates a series of events that will (it seems) dominate the remaining five books. The Autarch Sejanoz of Bhanar despatches a mission to excavate the Claw of Naar from the ruin of Naaros and True Friend must intercept the party before it returns to the capital. Sejanoz proceeds with the invasion of Chai without the Claw in The Hunger of Sejanoz (#28, 1998) and True Friend is sent to escort the Khea-Khan to safety. The Hunger of Sejanoz was published with only three hundred (as opposed to the usual three hundred and fifty) gameplay sections – I am not sure why – but Dever has plans to remedy this… all of which will be discussed in my review of The Storms of Chai.