A Slip Under the Microscope, by H.G. Wells (Penguin Classics) | review 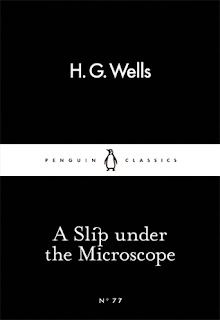 The precise definition of science fiction has always been a matter for debate, the simplest answer being the stuff H.G. Wells wrote about. With books like The Time Machine (time travel), The First Men in the Moon (space travel), The War of the Worlds (alien invasion), The Shape of Things to Come (future history), The Invisible Man (experimentation on oneself) and The Island of Doctor Moreau (experimentation on others) he staked out the territory of a genre that still thrives, still finds new places to go, almost seventy years after his death. This fifty-five page Penguin Little Black Classic contains two of his short stories which don’t quite fit that narrative. The title story, “A Slip Under the Microscope” is science fiction of the other kind, a story about science, where a driven young student, labouring under the pressure of being a working class boy at the College of Science, where pupils on scholarships are not even invited to sit down when meeting their tutors, makes a terrible mistake during an examination. The other story, “The Door in the Wall”, is more fantastical, about a government minister who longs for the secret garden he found as a child, the magical entrance to which only ever presents itself again when he has not the time to enter it. Both stories are very, very good. The first couple of Little Black Classics I read – As Kingfishers Catch Fire by Gerard Manley Hopkins and Aphorisms on Love and Hate by Friedrich Nietzsche – were dreadful, but it’s clear I judged the series too soon. Stephen Theaker ****
Posted by Stephen Theaker