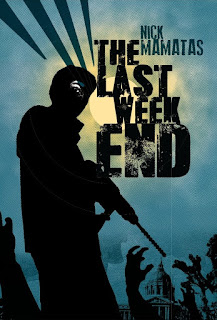 Even before the collapse, Vasilis Kostopolos was not a nice guy, and not a happy guy either. A self-loathing alcoholic who follows an ex-girlfriend to Boston, who follows random women on the subway while abusing them in his mind, who doesn’t mind if the money he spends on drink helps fund the IRA, he ends up in San Francisco, a surprisingly good place to be when the dead start to rise. There are no cemeteries there, and the zombies struggle with the big hills. He’s a writer, and he can prove that with the print-out of his one published story that he keeps in his pocket at all times, but he takes a job as a driller. When the dying seem likely to turn, he gets a call. If he’s lucky, he gets there once they’re dead but before they’ve revived, but he’s rarely lucky. Turns out he’s pretty good at the job, or at least he doesn’t quit or get eaten. He’s a guy who spent his “adult life trying to avoid adult life, living a simplified version of it without dreams of a family”. Before the collapse he would consider killing himself “a dozen times a day, maybe more”. So when everything falls apart for everyone else (at least in the USA; nowhere else seems to be affected) he copes pretty well, his life hasn’t got much worse. (Also a theme of the later show Fear the Walking Dead, where a junkie adapts better to the apocalypse than the rest of his family.) He even starts to meet women: Alexa, who shoots a boy who jumps out at them, pretending to be a zombie; Thunder, a friend of the dead boy who shamelessly steals Vasilis’s stuff; Jaffe, a civil servant who kept on serving after the collapse. Thunder and Alexa share a desire to get to the bottom of things, to uncover the mysteries of the apocalypse, to find out what the government (such as it is) is hiding, and Vassily gets mixed up in their plans despite himself. This is a terrific book, the kind of thing you might expect if McSweeney’s had a horror imprint, intelligent, provoking, self-aware, and full of interesting ideas. You wouldn’t ever want to be this guy, as a writer, or as a human being, but you can understand why he survives, and why it takes the breakdown of human society for him to write his great American novel. ****
Posted by Stephen Theaker