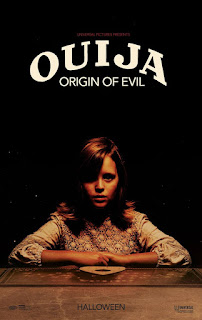 Will this prequel overcome its predecessor’s mediocrity? Yes.

This Halloween season, horror film fans had slim pickings at the theatre. And I wouldn’t be surprised if, like me, they felt disappointed when they learned about the season’s feature offering: Ouija: Origin of Evil.

Last year, Ouija had a few scares, but overall, it wasn’t memorable. Thus, one would think that when filmmakers questioned whether they should do another one, surely the planchette would slide to “no”. But that wasn’t the case. A new writer/director (Mike Flanagan) and co-writer (Jeff Howard) came on board – pun intended – and, surprisingly, they pulled off a much better film.

Ouija: Origin of Evil doesn’t offer much that the horror aficionado hasn’t seen before. However, this story of a Hasbro classic gone haywire effectively uses the tools at its disposal, offering an intimate and creepy take, replete with nerve-wracking scenes and jump scares, on how the game wreaks havoc on a small family living in 1960s Los Angeles.

Alice Zander and daughters Lina and Doris use rigged séances not so much as a money-making scheme, but rather as a means of bringing solace to those who’ve lost loved ones. Then they add a Ouija board to spice up their routine. Things get dicey when a spirit starts communicating with youngest daughter Doris via the board. Is it deceased husband/father Roger, or is it something more malicious? Father Tom Hogan, the priest/headmaster at the girls’ school, gets involved and the spiritual threat intensifies.

The Ouija rules are simple: 1) never play alone; 2) never play in a graveyard; and 3) always say goodbye. But if you’re going to show rules in a movie, you better break them! And Ouija: Origin of Evil does.

The characters in Ouija: Origin of Evil are more fully developed than those in Ouija. Widow Alice struggles to make ends meet, yet she genuinely wants to use her machinations to help people. She even declines payment from a client who nearly has a heart attack. Teenager Lina is bright and well-behaved, but her interest in classmate Mikey gets jeopardized by all the spiritual mischief going on. Yet it’s young Doris, bullied by her classmates, who undergoes the biggest change under the spell of the spirits. Watch for a particularly satisfying scene in which one of Doris’s tormentors gets a taste of his own medicine. In another scene, Doris asks Mikey if he wants “to hear something cool”, then proceeds to describe in intricate detail what it feels like to be strangled.

Flanagan and company use several techniques to jiggle the nerves. For instance, when the camera lingers on ordinary objects, one cringes with uncertainty: will something pop onto the screen? In the opening scene, the only sound that fills the séance parlour is that of the clock. Done before, but still effective.

Still, nothing jacks up the heart rate more than when a character peers through the planchette’s glass opening, which helps identify any spiritual entities that might be present. As the panning camera shows a warped view of a room, there’s always the chance that something will appear. It’s intense!

The fear potency gets stronger with a host of other horror film tricks: ceiling walking, wall crawling, milky eyes, impossible facial contortions, and getting yanked around by unseen entities.

Ouija: Origin of Evil may not have broken new ground in the horror genre, but it did entertain consistently. In an age of Candy Crush Saga, Minecraft, and other smartphone games, it’s refreshing to see people come together around a board game-inspired film for some good old-fashioned scares. – Douglas J. Ogurek ****