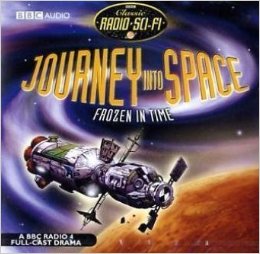 This fifty-seven minute adventure is the fifth Journey into Space. The first three, Operation Luna, The Red Planet and The World in Peril, were long, episodic sagas broadcast in the fifties, while the last three, The Return from Mars, Frozen in Time and The Host were radio plays broadcast in 1981, 2008 and 2009 respectively. All were written by Charles Chilton, except The Host. As this story begins the usual crew of Captain “Jet” Morgan, “Doc” Matthews, Mitch and Lemmy are on their way back from Neptune in the Ares. The cast is all new except David Jacobs, who played several supporting characters in the original trilogy, often in the same scene, and here plays Jet Morgan. A problem with his cryogenic sleep unit meant Jet has been awake for practically the whole thirty-year trip home, and a good thing too or the ship might well have been destroyed. He wakes the others as they approach Mars, long-forgotten and short on fuel. They land near the Saviour 1, itself stuck there after developing a fault. Good thing Mitch is here, since in this distant future of 2013 it’s unusual for a crew to include an actual engineer. The media rep and the health and safety officer aren’t much good at fixing spaceships. The captain is now a “flight manager”, and Doc notes with bemusement how the remaining crew of the Saviour 1 spend all their spare time playing games on their screens. (If Charles Chilton could see us now!) They seem unwell, and there are clues to suggest that they’ve been up to no good... This story keeps the mood of the originals very well, remarkably so given the fifty years that had passed when this was produced, and that’s helped by the use once again of Doc’s diary entries to bridge narrative gaps. The crew all behave in recognisable ways, even down to the flashes of the old irritation with each other at times of stress. It’s just a shame that it stops after one hour, instead of ten. Stephen Theaker ****
Posted by Stephen Theaker