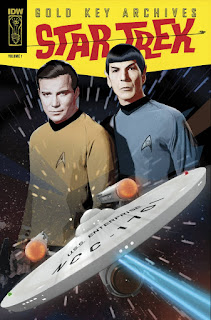 Back when the William Shatner version of Captain James Kirk first commanded the USS Enterprise, Gold Key published these cheesy but energetic stories about him and his crew; even in those early days for the franchise, half-Vulcan first officer Spock must have been the clear breakout character, since he appears more prominently than the captain on four of the six covers. Tony Isabella explains in the introduction that none of the creators involved in this series saw any episodes before starting work, which may explain why Scotty is in these issues an awkward blonde, and why in “The Planet of No Return” an encounter with a plant civilisation ends with the planet being scoured of all life, on Spock’s urgent recommendation. In “The Devil’s Isle of Space” the crew nonchalantly leaves convicts to be killed in an explosion, simply because it is “the way of their society”. These are big-scale stories where anything goes. In “Invasion of the City Builders”, a planet’s land has been almost completely covered by cities, thanks to automation gone too far, and “The Peril of Planet Quick Change” features missiles being fired into the planet’s core. In “The Ghost Planet” the ship drags the rings away from a planet, and in “When Planets Collide” the ship must somehow stop two worlds from crashing into each other, an impact which would pitch many of the planets of the Alpho galaxy “out of orbit… to burn in space!” Galaxies seem to be quite small here, and the ship seems to visit a new one every issue! Time is measured in lunar hours and galaxy seconds, everyone in the universe speaks Space Esperanto, and Kirk calls aliens “space scum”. So the stories are goofy, but that only makes them more enjoyable. It does capture that sense from the original series that the universe was an incredibly dangerous place where even heroes like Kirk and Spock would only survive if luck was on their side. The newly recoloured art looks great, and the simple six-panel grid layout makes for very easy reading. ***
Posted by Stephen Theaker