Tales of the Marvellous and News of the Strange, translated by Malcolm C. Lyons (Penguin Classics) 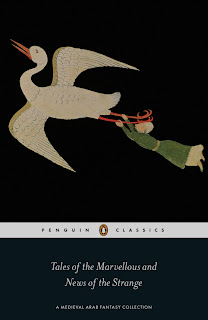 This is a collection of medieval Arabian fantasy, or at least half of it, the other half being lost to the sands of time. Malcolm C. Lyons provides a new translation, rendering the book rather more readable than the excellent and informative (but spoiler-heavy – read it after the rest of the book) introduction by Robert Irwin suggests the original to be. On Goodreads a potential reader has asked whether the book is suitable for children, and the answer is most definitely no. Grimdark a thousand years before George R.R. Martin or Joe Abercrombie, this is brutal, horrible and cruel, stories of terrible people doing awful things in a world ruled by capricious and sentimental tyrants. Racists, rapists and murderers, these characters lie, cheat and steal their way to happy endings, often saved by a last-minute religious conversion or appeal to a deity. That the stories are about such awful people wouldn’t be so jarring if it weren’t for the religiosity of it all. Irwin cautions against “the enormous condescension of posterity”, quoting E.P. Thompson, and that’s a fair point, but it’s hard to really enjoy stories in which slavery and sexual aggression are so positively portrayed. For example, in “The Story of Sakhr and Al-Khansa’ and of Miqdam and Haifa’”, Sakhr sneaks into a girl’s tent and draws his sword, saying “if you utter a word I shall make you into a lesson to be talked of amongst all peoples breaking your joints and your bones”. The girl “saw that he was handsome as well as eloquent; she weakened and looked down bashfully as he got into bed with her”. That’s fairly typical, and that story gets worse. The book is also quite repetitive, with everyone who is half-decent to look at being described as like the moon, Indian swords all over the place, people hitting themselves in the face all the time, and every man being “delighted” to discover that his copulative partners are still virgins. (In one case, that’s even though they slept together earlier in the story.) That’s not to say there’s nothing to enjoy here. Though women are generally shown in a terrible light and treated horribly – for example, a king is told the story of ‘Arus al-’Ara’is to make him glad his daughter died! – several are shown to live independently and drink wine very happily. It was surprising to see an acknowledgment of the existence of gays and lesbians, even if it was to discourage such romances, and in the story of the Foundling and Harun al-Rashid there are heavy hints of male romance. “No one is going to rub him down except me,” says the executioner Masrur in a bath-house. The story of Miqdad and Mayasa shows the former killing enemies like a supercharged Conan the Barbarian and the desert being rolled up for the latter. In the story of Julnar of the Sea a king says of a gorgeous woman, “Praise be to God, Who created you from a vile drop in a secure place!” A nice way of putting it. The story of Abu Disa is amusing: a browbeaten weaver is pushed into posing as an astrologer, and through various turns of fortune makes a series of astonishing and lucrative predictions. The story of Sa’id Son of Hatim al-Bahili is a fascinatingly curious attempt to retcon the Bible. Overall, though, I found the book such a struggle to get through that I wouldn’t recommend it on its own merits as a collection of stories; they’re just not very good; but as a curiosity, as a glimpse into the storytelling of the past, as a translation and as a historical artefact it may find appreciative readers. Stephen Theaker ***
Posted by Stephen Theaker