Arrow, Season 2, by Marc Guggenheim and many others (Warner Bros Television) | review 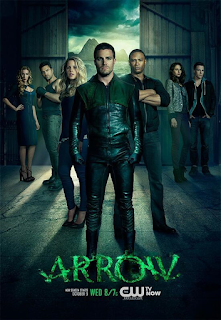 Oliver Queen was a sleazy rich kid who took his girlfriend’s sister away on a disastrous yacht trip, leaving him marooned on an island, from which he was rescued five years later. He returned with a new set of skills, and a new sense of purpose, determined to use his archery and acrobatics to take down the wealthy one percenters who have been bleeding the city dry. Unfortunately, the first season of Arrow was in its early stretches often indistinguishable from stablemate Gossip Girl, but as its roster of costumed characters built up it improved, an episode with the Huntress attacking her father’s compound being particularly good, and it ended well, with a serious threat that pushed the fledgling hero to his limits. Season two is even better, putting Oliver and his night-time nom de guerre under an ever-tightening screw, as a friend from the past returns with a grudge. Flashbacks to the island continue, moving more or less in pace with current-day events, creating an unusual effect whereby the viewer must constantly rethink the Oliver we met in the programme’s first episode. DC fans will appreciate the introduction of a certain group of villains sent on deadly missions by (the remarkably slim) Amanda Waller, and by the end Black Canary is in it so much they could have put her name in the titles. Supporting characters Diggle and Felicity are also given plenty to do, though Oliver’s family and friends, especially his mother and Laurel, tend to zig and zag rather randomly whenever the plot requires it. The season draws on classic New Teen Titans, and from there brings us one of the best villains yet in a television superhero series. Despite Felicity’s best efforts, there isn’t much humour, and the dialogue is rarely more than functional; the thrilling story just about makes up for it, but one hopes John B. Arrowman plays a bigger part in seasons to come. In his few scenes here he displays a totally welcome cheekiness that was rather buried in season one. Stephen Theaker ***
Posted by Stephen Theaker