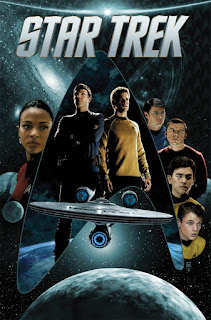 The ongoing Star Trek comic follows the adventures of the Chris Pine version of Captain James Kirk and his crew, as shown in Star Trek XI, XII and XIII. This first volume collects issues one to four, set soon after the eleventh film, with Kirk in charge of the USS Enterprise a good deal sooner than in the previous continuity, and the five year mission off to an early start. Oddly, though, they still run into many of the same situations, since the two stories here are adapted from the television episodes “Where No Man Has Gone Before”, in which crewman Gary Seven acquires the powers of a god after the Enterprise tries to cross the galaxy’s edge , and “The Galileo Seven”, in which a shuttlecraft crew led by an as-yet untrusted Spock is lost and stranded on a dangerous world with aggressive locals. James Blish’s prose adaptations tended to improve on the original programme, so maybe these comics could do the same? Sadly not. Adapting forty-minute episodes to forty-page comics doesn’t leave room for a lot of detail, and although the stories are subtly changed by taking place in the new continuity they feel sketchy and underfed. The artwork is good, the likenesses pretty decent, it’s just that the project itself feels a bit pointless. Perhaps it’s aimed at fans of the new films who haven’t watched the original show? Either way, it’s good to see that subsequent volumes add new, original stories to the mix. **
Posted by Stephen Theaker