The Zombies That Ate the World, Vol. 1: An Unbearable Smell! by Jerry Frissen and Guy Davis (Humanoids) | review by Stephen Theaker 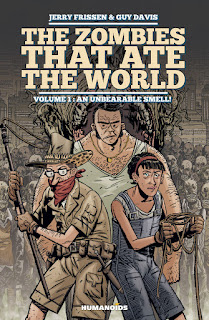 This digital album tells four of the “everyday occurrences that happen in the twilight of Los Angeles”, to quote the line that ends them all. It is 2064 and the dead have been coming back to life. They aren’t violent, at least no more than they were when they were alive, and so the government has decreed that the living and the dead must live peacefully together. That’s going pretty well until Otto Maddox, a filthy rich man with extremely expensive hobbies, has an actor disinterred, Franza Kozik. When alive, she starred in such films as Queen of the Zombies and Flesh Feast, and once out of her coffin she picks up where she left off, eating brains, but for real this time, and that inspires other zombies to try it too. The other stories here include a historian of the twentieth century who wants his reanimated father-in-law peacefully disposed of, and a Nazi type who wants the brain of a particular zombie rewired to restore its intelligence. All four stories feature, to a greater or lesser extent, Karl Heard, who with his sister Maggie and their hulking associate The Belgian, makes a barely legal living as a zombie catcher. Elsewhere, Christians are executing thousands of people in the Holy Land in hopes of persuading Jesus to return, and a scientist has reanimated a dinosaur. This is an odd book, with a humorous tone that sits a bit uneasily with the tawdry and horrible stories it is telling, but it is worth reading, especially for the art of Guy Davis, who readers might know from Sandman Mystery Theatre or The Marquis. His style of drawing is exceptionally well-suited to the portrayal of the rotting undead, not to mention the other sleazy types in the book. ***
Posted by Stephen Theaker