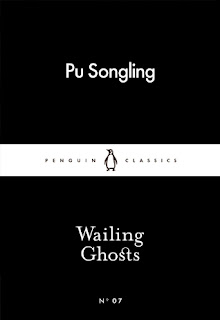 Translated by John Minford, these are fourteen very short fantasy stories and tall tales, written by a Chinese author who lived from 1640 to 1715. They are set in a world of fox spirits, demons and red-headed monsters. The book doesn’t explain its humanoid foxes, but they seem to be like those in The Heavenly Fox by Richard Parks, where foxes who lived to the age of fifty could assume human form, and those who lived to a thousand became immortal. Because the stories are so short, it’s difficult to say much about them without giving away the entire plot, but the highlights include “King of the Nine Mountains”, about a man who rents his back garden out to a party of a thousand fox spirits and promptly betrays them, and “Butterfly”, where a syphilitic horny teenager, Luo Zifu, “breaks out in suppurating sores, which left stains on the bedding” and is thus driven out, eventually to find happiness with Butterfly, a supernatural lady who lives in a grotto. He blows it, of course. Other stories include “The Monster in the Buckwheat”, “Scorched Moth the Taoist”, “The Giant Turtle” and “A Fatal Joke”, which is barely a page long but features the book’s most horrible image. When a book this good costs 80p, you’d be daft not to buy it. Stephen Theaker ****
Posted by Stephen Theaker