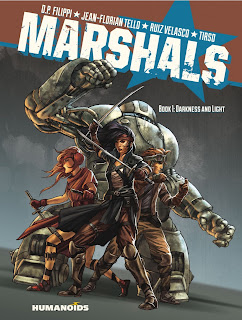 Hisaya is a marshal on the planet Iriu, working in an area under the control of the air consortium. Her robot partner is wrecked during the apprehension of a former robo-trafficker, but her grandad can’t supply her with a replacement this time: he’s switched to making buxom humanoid pleasure bots (though they can fight when needed, and it will be needed). Instead he introduces her to Tetsu, a young mechanic with a passion for robotics who has built a nifty new defence bot – and she can have it if she will take Tetsu on as an apprentice. A five-page naked sauna scene with the pleasure bots later, and Marshal Hisaya returns to the city with her new apprentice and her new bot, just in time for a series of treacherous attacks that will leave everyone running for their lives. Darkness and Light is the first of four digital albums, also collected in a single hardcover book from the same publisher. It does a good job of setting up this steampunky, Final Fantasyesque world, and Marshal Hisaya is quite the badass. The nude scenes feel a bit redundant and pandering, and it isn’t always easy to follow the action, but in general the art is very appealing and characterful, a bit reminiscent of Ian Gibson’s 200AD work, with the extra detail that working on an album rather than weekly pages can allow. The colours, by Studio Bad@ss, do a great job of picking out all that detail and letting the eye make sense of it all. A good start to the series. ***
Posted by Stephen Theaker